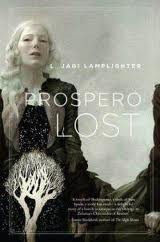 L Jagi Lamplighter spent 15 years writing, re-writing and revising her Prospero's Daughter Trilogy before this first volume was published in 2009. Other compelling data include her history as a roleplaying gamer and the novel's roots in a game she was involved with in the early 1990s. All of this can be perused on her website. It also explains the slightly dated feeling of the novel.

During those 15 years I was reading and completely enjoying a type of novel that has elements of fantasy or non-reality while it crosses boundaries between science fiction, fantasy and mainstream fiction. (See list of examples at the end of this post.) Only when I was introduced to Prospero Lost did I learn that such novels belong to a genre called "slipstream," coined by sci fi writer Bruce Sterling.

I have had some difficulty writing about Prospero Lost because it does not in all ways measure up to some of these other "slipstream" novels while at the same time it surpasses the wonders of them. One more sentence in this distressingly long prologue: Having a familiarity with Shakespeare's The Tempest enhanced my enjoyment while reading Prospero Lost, but unless you are a hopeless nerd like me it is not required reading.

Prospero Lost introduces Miranda some 500 years after the time of The Tempest. She has been the CEO of Prospero, Inc for many years. Prospero created the company long ago by means of contracts with the Airie Ones (think Ariel in the play) with the purpose of using magic to keep natural disasters at bay and ensure the safety of petroleum and electricity when in human hands.

In The Tempest, Miranda's mother died in childbirth. Since then, Prospero remarried and had seven sons and one daughter. Over the centuries the second wife passed away and the family had disintegrated due to these siblings going off in different directions, taking with them magical gifts from their father and leaving only Miranda to keep Prospero, Inc running. Prospero himself has been up to other secret projects. When Miranda receives a cryptic cry for help from Prospero, she attempts to gather the family back together and give them Propero's warning of impending doom.

Full of conflicting desires, Miranda is hard to pin down as a character. For one thing, she is kept perpetually young and beautiful by a magical water from the end of the world, yet when working for Prospero, Inc she acts like a seasoned executive. She is committed to Eurynome, a Goddess affectionately known as The Lady, who provides guidance in matters both temporal and spiritual. Miranda also has two love interests: Ferdinand, to whom she was engaged at the end of The Tempest, and Astreus, an elf. Her unreasoning loyalty to Prospero compels her to put his demands above all else.

I liked best the overall idea that magic and supernatural entities are at work in the world, unbeknownst to humans. I also found the centuries long history of the Prospero family entertaining and sometimes thrilling. I was not so enamored of the plotting. I suppose that continuous battles with evil enemies are a necessary element in the fantasy genre, but I found them boring after a while, especially since Miranda's immortality means that she can't ever truly lose.

Due to her publisher's wishes, the author broke her 1000+ page tale into a trilogy, so by the end of Prospero Lost, Miranda has found only half of her siblings and is not one whit closer to finding Prospero. But a gift from Atreus, the passionate elf, has put into reach the attainment of her deepest desire. Since that desire is in direct opposition to the foundations of Prospero, Inc, Lamplighter leaves the reader hanging by a cliff. Will magic save the world or destroy it?


(Prospero Lost is available in paperback, hardcover and e-book by order from Once Upon A Time Bookstore.)