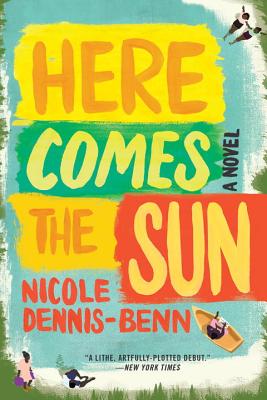 Here Comes the Sun, Nicole Dennis-Benn, WW Norton & Company, 2016, 345 pp
For my last review of 2018, I bring you this amazing debut novel. It was the September, 2016 selection of the Nervous Breakdown Book Club, a subscription and a case for why I continue to subscribe there, because I get books I might otherwise not have heard of let alone read.
I went from reading The After Party directly to Here Comes the Sun, only to find that it is another novel about a mother trying and failing miserably to protect her daughter, in this case two daughters. This time though the setting is Jamaica and the social strata is near the bottom instead of the top. Also, the older sister tries and fails to protect the younger though in different ways than the two best friends in The After Party. Those similarities made me think about how human frailties show up just about everywhere and in many kinds of lives.

For many upscale Americans, Jamaica is a tourist destination and that fact plays a part in the story. For many indigenous Jamaicans their island country, still part of the British Commonwealth, is a mix of those involved with a growing economy and those struggling to move out of poverty. The family in the novel represents that same mix.

Margot, the older sister, was taught by her single mother to trade sex for survival. She has a mid-level job at a resort hotel but her main earnings come from late night sexual encounters with hotel guests. At that she is supremely successful and she uses those earnings to ensure her younger sister Thandi finishes at her private Catholic high school and goes to college and beyond to become a doctor. No one asks Thandi if she wants this but it seems to be the best way to give her a chance at life, higher social status and security.

The plan goes right off the rails. Here Comes the Sun is a tragedy of large proportions. Not one of these three females gets what she wants despite Herculean effort. Not a novel for those who like happy endings where hard work, intelligence and talent pay off for women. It is however another true picture of the failure of post-colonial globalism and interference by foreign governments.

Why read it? Because the writing is incredibly good and it is a microcosmic story showing the shameful underside of our supposedly wonderful, prosperous, democratic macrocosmic world.

Yet Nicole Dennis-Benn is so far having a happy ending. She was born and raised in Jamaica but emerged from the underside and now lives, writes and teaches in Brooklyn, happily married to her wife. Her second novel, Patsy, will be published in 2019. I will read it!

(Here Comes the Sun is available in paperback by order from Once Upon A Time Bookstore.)
Posted by Judy Krueger at 12:26 PM