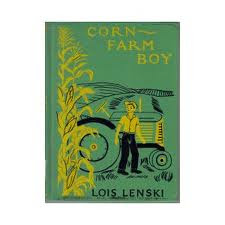 In the tenth volume of her American Regional Series, Lois Lenski goes to Iowa. Dick is the middle child of a corn farming family. He suffers from what was called rheumatism back in the 1950s and the condition sometimes keeps him in bed when he would rather be driving a tractor. He loves everything about farm work and also saves runts as pets and can heal all kinds of animals.

A corn farm is really a hog farm, but corn must be raised and harvested to feed the hogs. Dick's father rents his farm from his wife's brother who lives in town and takes most of the income of the farm. During the course of the story the reader gets a good overview of the cycle of raising corn and hogs on a farm.

This was the least impressive of the books I have read in the series so far. I had not read it as a child. Dick has to learn to live with his infirmity while his parents must live with their position in the family. I though Uncle Henry, the owner of the farm, was pretty much a creep. But as in all of the books, I got invested in the characters.

Now that I have read 10 of the 17 books in the series, it has dawned on me that each book is contemporary for the year in which it was published. Corn Farm Boy shows life as it was on an Iowan corn farm in 1954, with machinery becoming more important to successful farming. It makes quite a contrast to the agribusiness of today and in that way would be good history for kids.

The most interesting part was the section near the end when they take the hogs to market in Sioux City; the crowds of people, the pens and tunnels through which the hogs go to slaughter, etc all make a big impression.


(Corn Farm Boy is out of print so best found in libraries and through used book sellers.)