THE AGE OF DREAMING

Again Nina Revoyr took me into another time here in the city where I live and showed me a world we can barely imagine in 2015. I loved her first book, Southland, set in Los Angeles in the 40s, 50s, and 60s. In The Age of Dreaming, she goes earlier to the era of silent film.

Jun Nakayama was a (fictional) silent film star in the early days of Hollywood. He emigrated from Japan as a young man and through a combination of hard work, self-assurance, a passion for acting, and plenty of luck, wound up as a contracted actor to one of the first film studios. He rose to star status, fame, and riches. Then suddenly in 1922, he vanished from the scene.

As the book opens he is an older man living alone, friendless, and devoted to his simple routines. When he is contacted by a young journalist who is writing an article about the opening of a Silent Movie Theater in 1964, he begins to look back on his early life for the first time in years. His recollections tell the story.

Jun is an unreliable narrator because he choose to ignore what was going on around him during his career. He turned an unaware eye on the sexual orientation of his favorite director and denied the growing racism toward the Japanese living in California, while he remained oblivious to the love of his best Japanese friend. As he uncovers what he had hidden from himself for all those years the increasing emotional tension drives the story. An unsolved murder in 1922, just before Jun left the movie world provides a mystery.

The writing is restrained but elegiac and reminded me of Kazuo Ishiguro and Chang Rae Lee, both of whom are of partial Japanese descent as is Ms Revoyr. I was also put in mind of Glen David Gold's Sunnyside, an excellent novel built around the life of Charlie Chaplin.

The Tiny Book Club met at Musso and Franks, a historic Hollywood restaurant, to discuss this gem of a book. It happened to be the day after Leonard Nimoy died and when we exited the restaurant we found a small crowd of locals and tourists gathering around Nimoy's Hollywood Star in the sidewalk, laying flowers and saying goodbye to another fallen star.

(The Age of Dreaming is available in paperback by order from Once Upon A Time Bookstore.)
Posted by Judy Krueger at 12:38 PM No comments:

I love nothing more than a well-written unique story. I was blown away by The Peerless Four, a fictional account of four young Canadian girls who competed in the 1928 Olympics, the first time in thousands of years women were ever allowed to compete.

These sixteen/seventeen year old girls each not only enjoyed being athletic from a young age, they craved it. Whether running, high-jumping or shooting hoops, each one overcame objections from parents, some through drastic measures such as the one who hid in a closet and refused to eat.

Here is what men thought about females in the Olympics in the 1920s: "No female should be seen swaggering around, pretending to be male. If females must compete in the Olympics, they should be consigned to participating in ladylike sports that allow them to look beautiful and wear some pretty cute costumes: archery, figure skating, and horseback riding being the best examples--activities that would not cause them to perspire. Furthermore, there is scientific evidence that the rigors of athletic activities weaken women for motherhood."

After introducing the four women with a quick chapter each on how they became athletes in childhood, the author gives us Mel, who narrates the novel as the chaperone for the Peerless Four.

Mel was a runner herself. As the story progresses we learn that she quit running after a miscarriage or two, falling for the idea that motherhood makes a woman complete. What made Mel complete was running and her marriage became a prison where she could not be herself, even though the husband wasn't necessarily a bad guy. He even allowed himself to be convinced to let Mel go to Amsterdam with the female team.

I am possibly the world's most unathletic person but this ostensibly sports novel got hold of me and would not let go. Mel, Jack the coach, and the four girls circle around each other in varying states depending on how training is going, the differing pressures on them all, and each one's past baggage. The climax at the Games themselves is so full of tension, I could barely breathe as I read.

Finally comes the real truth about any athlete-the aftermath of winning or losing. Who came through unscathed? The chaperone who never competed, the coach who had made those girls his reason for living, or the girls themselves? Read The Peerless Four and find out.

The other day I watched the movie "Foxcatcher." I kept wishing I were watching a movie made from The Peerless Four.
Posted by Judy Krueger at 11:20 AM 2 comments: 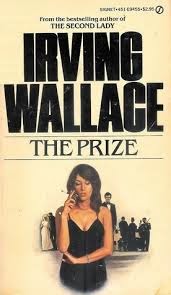 Irving Wallace's novel about the Nobel Prize was the #8 bestselling book in 1962. It took him over a decade to research and write. Unfortunately his research lays too heavily within the story and made the book overly long.

I could say that I got quite an education about the prizes but I would rather have looked all that up on Wikipedia and then enjoyed the story. Of course, Wikipedia did not exist in 1962.

By following the stories of six fictional Nobel winners, their associated wives or relatives, and some members of the Academy, he wove a pretty good tale. Each winner, whether scientist or writer, comes to Stockholm for Nobel week with personal baggage, vulnerable in different ways to the politics of the Nobel committees, to the press, and even to the world events of the times.

Though Wallace's characters are as much types as they are people, he gives each enough substance so that the reader becomes involved and participates emotionally in their changes. Of course, there are various romances spiced up with explicit sex (apparently Wallace is famous for that) but to his credit he makes of sex something seamless with the rest of life rather than sensational. He is clearly not in agreement with Puritanical views about its evilness.

Whenever he wrote about the trials and activities of the characters the story raced along. The historical bits, the travelogue style about visits to Stockholm's landmarks, and his descriptions of architecture, furnishings, restaurant meals and routes through the city were beyond boring. Unless you like that sort of thing, skimming is recommended.

In the end, he presents a balanced picture of the behind the scenes selections of the winners, the idiocy of such awards, as well as the positive effects on both the world and the winners due to recognition of great scientific work and literature.

I think the prize itself has been overshadowed by the many pop culture awards we have now, but I was still thrilled in recent years when Toni Morrison and Doris Lessing won. For me, the book was worth the read.

( The Prize is out of print, available as an ebook from certain on-line sellers, and in paperback from used book sellers. I found a hardback copy at my local library.)
Posted by Judy Krueger at 12:25 PM No comments: 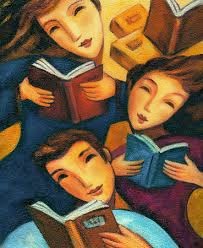 And the reading goes on! Here is what my reading groups are reading in March:

The New Book Club: We are reading two books this month!

Once Upon A Time Adult Reading Group:


One Book at a Time:

Posted by Judy Krueger at 11:36 AM No comments:

I have read Divergent and seen the movie (twice!) My granddaughter loves this series. She is 13 and has not been harmed in any way by reading these books. In fact, we love to talk about them.

Insurgent picks up right where Divergent left off. Tris is still just about the best heroine I have met in fiction anywhere. Intelligent, strong, daring though not fearless, loving though nobody's fool. In the second volume she is suffering a form of PTSD from losses and incidents she went through in Divergent but she does not succumb. She powers on.

Tris is 16 and in love with Tobias (aka Four) but that love gets severely tested. They do a lot of kissing and fondling and even sleep in the same bed sometimes though they do not have sex. What I like about Roth's characterization of Tris is her ability to think and perceive for herself and that she is in fact more able than her boyfriend in several ways. She does not fail to use her abilities to stand before him, speak the truth, and call him out when he is being stereotypical as a male or weak as a human.

I once read an essay by I think either Anne Lamott or Natalie Goldberg (two of my favorite writing gurus) where she took issue with books that take you by the throat and with non-stop action and plot keep you reading to find out what happens. This kind of writing frightened her and she was suspicious that it had no value. I could see her point but then again why shouldn't a book be purely entertaining and what is wrong with reading 525 pages in just a few hours?

Veronica Roth does this to me while she also gets me thinking about deeper things like loyalty, truth, the state of mankind and why mind control is not a way to end war or conquer mankind's darker impulses.

(Insurgent is available in paperback on the shelves at Once Upon A Time Bookstore.)

Posted by Judy Krueger at 12:29 PM No comments: