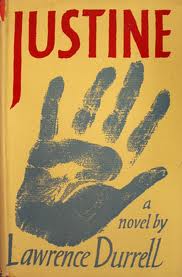 Justine, Lawrence Durrell, E P Dutton & Co, 1957, 253 pp
I first read Justine when I was in high school. I read it for the sex. I don't think I got much else from it except that it was a tragic love story set in the fascinating city of Alexandria, Egypt. Rereading it was a revelation. Durrell's writing is exquisite though in another way so desultory that I could only read about thirty pages before falling into a deep sleep, no matter the time of day. But the characters!
Justine herself is a deeply troubled woman who refuses to respond to psychoanalysis. For some reason I respected that. Clea is the sexless or possibly lesbian guardian angel. Balthazar is the mystic and Melissa the phthisic sacrificial lamb. In their "possessive coupling(s)", as Joni Mitchell would say, they are passionate, somewhat frantic and working out their personal histories and destinies. You could say that the story is melodramatic but then so is life when we are not being ironic. Perhaps it was also the melodrama that appealed to me as a teen, the way Twilight appeals to teens today.
Durrell is on a level with Camus as a writer and deals in the ways of the heart as deeply as Camus dealt with the mind. They are almost polar opposites and so make a very fine pair. I love them both.
As in much good fiction, the city of Alexandria acts as a character and is in fact accused for a good deal of what happens. Durrell makes its alleyway, shores, dwellings and weather so vivid, I wanted to go there. In fact, Justine is the first volume of what became "The Alexandria Quartet." That means three more visits with these characters and that amazing city.
(Justine is available in paperback by order from Once Upon A Time Bookstore.)
Posted by Judy Krueger at 11:19 AM