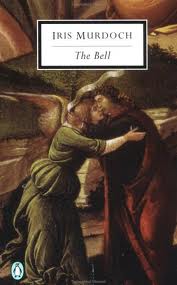 The Bell, Iris Murdoch, The Viking Press, 1958, 342 pp
Iris Murdoch's fourth novel shows a strengthening of fictional power while continuing her philosophical inspection of human character. I love the opening lines: "Dora Greenfield left her husband because she was afraid of him. She decided six months later to return to him for the same reason."
Dora is one of the two main characters and represents the amoral personality. She is a fairly young woman, married to an older man. While living mainly on nerves and feelings, she has a horror of any sort of confinement and is allergic to boredom, but has virtually no concept of right and wrong.
The other is Michael Mead, a failed religious man who struggles with his homosexuality like a character from Graham Greene. Because sodomy is considered a sin in Christianity, Michael's deep desire to be a priest is constantly thwarted by his failure to keep his sexual desires in check.
The setting is Worcestershire, England at Michael's family estate, where he has created a small lay community of Episcopalians who seek retreat from the world as they attempt to deepen and live out their Christian faith. Dora provides the comedy, which is always a flavor in Murdoch's books. Michael brings the anguish. The other characters are there to create the interactions, tensions and plot, but none are flat or feel secondary.
I admired Murdoch's talent in examining such weighty ideas without judgement. If she found any of her characters unworthy, she only made it known with her tongue in her cheek. Also impressive was her range of personalities, both male and female. Besides the flighty Dora are a hardworking mother-hen type, a fairly psychotic young woman who intends to become a nun, and a deeply wise Mother Superior in the nearby convent.
The eponymous bell stands for an ancient portentous legend and an object of desire, while it drives the plot. I was not wild about the long descriptive passages but did not mind the somewhat lengthy expositions on Michael's and Dora's inner lives. For some reason known only to Iris Murdoch, she used the word rebarbative about every thirty pages. A joke?
Finally, it was historically fascinating to compare the mid 20th century views on male homosexuality to those of the early 21st century. Murdoch gives a clear picture of the previous mindset but was undoubtedly ahead of her time.
The more Murdoch I read, the more impressed I am. I saw a comment by some reviewer the other day stating that Murdoch tells the same story over and over. I couldn't disagree more. She has that theme of human personality and interaction, but each novel I have read so far is unique.
(The Bell is available in paperback by order from Once Upon A Time Bookstore.)
Posted by Judy Krueger at 1:21 PM