THE IMMORTAL LIFE OF HENRIETTA LACKS 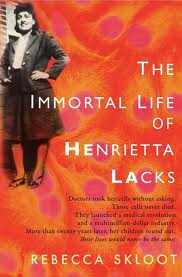 
If it were not for one of my reading groups, I doubt I would have ever gotten around to reading this wildly interesting book. Had I known how much scientific info was included, I still might have passed. I like knowledge but I have some kind of block on scientific study. Rebecca Skloot has been an award winning science writer but also has an MFA in creative nonfiction. She can make science plain, understandable, even exciting.

I had never heard of hela cells before. Now I know that they are human cells used in all kinds of medical and genetic research. These cells have grown or reproduced for over 60 years from a slice of the cervical tumor found in a young black woman, Henrietta Lacks, in 1951 at Johns Hopkins hospital.

OK, that is enough on the facts, because the book is a riveting story of a family descended from slaves and their unwitting and controversial intersection with modern medicine. Along with the telling of the story comes the adventure of getting the information. Rebecca Skloot is an unrelenting, sensitive and brave young woman.

The relationships she formed with Henrietta Lacks's offspring will surprise and enlighten you as well as break your heart.

Great reading. A pageturner of nonfiction. Best of all, a look at racial issues in modern day America as deep and meaningful as a Susan Straight novel.


(The Immortal Life of Henrietta Lacks is available in paperback on the shelves at Once Upon A Time Bookstore.)

Email ThisBlogThis!Share to TwitterShare to FacebookShare to Pinterest
Labels: Nonfiction