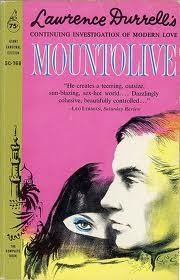 
Durrell's Alexandria Quartet is like a kaleidoscope, always refracting his characters and story in each succeeding book. In Mountolive, the third volume, the sense of political intrigue that began in Balthazar takes on an even deeper character. Mountolive is a young British diplomat in training when he meets Leila, who takes him as a lover on the advice of her crippled husband.

As we know already from Justine, Leila is mother to Nessim, Justine's husband. Now we learn that both women take lovers for political reasons. By the mid 1950s, it becomes clear that oil, Jews and Israel are involved in the story. Suddenly it all makes sense, because the main story of Great Britain after WWII was the nation's struggle to hang on to an empire that was in fact over.

But what a brilliant twist Durrell has achieved; taking what appeared to be a love story steeped in the mysterious city of Alexandria and turning it into a post Commonwealth critique of the underlying intentions of nations, leaders, diplomats, fanatics and businessmen. He reveals all of it like a Pandora's Box.

I read this book in late winter, 2011 during the days of the uproar in Egypt. It felt like I was reading exactly the right book.


(Mountolive is available in paperback by order from Once Upon A Time Bookstore.)