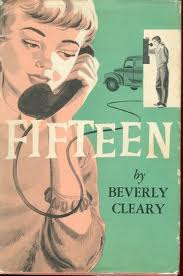 This was Beverly Cleary's first novel for teens, preceding The Luckiest Girl by two years. I had not read it when I was growing up, but if I had I probably would have loved it. I wasn't a complete girly girl but I certainly was interested in boys!

Jane Purdy is 15 and a high school sophomore. She has never been on a date with a boy she likes; only some boring boy named George, a friend of the family.

" 'Today I'm going to meet a boy,' Jane Purdy told herself, as she walked up Blossom Street toward her babysitting job." She does. She meets Stan and eventually they do go on dates, have misunderstandings, and it all ends happily.

Cleary gets it exactly right from a 1950s teen girl's viewpoint. The worries about her clothes, her hair, her parents. The inability to think of anything to say when she and Stan go on their first date. The extreme tension when she is waiting for a phone call. It is all there just as it was for me.

I don't think 15 year old girls will ever be that innocent again, but many will have similar insecurities. The girl in 13 Reasons Why is more of a modern day Jane Purdy than anything else though less able to deal with the stress. Jane has to deal with some bullying but has the resources to figure out how to handle it.

Those first experiences of going out with boys are a rite of passage even though the social conventions change through the decades. I wonder what a 15 year old girl would think of this book today.

(Fifteen is available in paperback by order from Once Upon A Time Bookstore.)
Posted by Judy Krueger at 5:58 PM