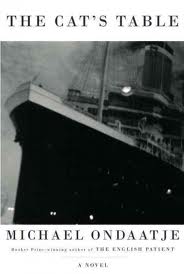 This is my first Ondaatje. I am still learning how to spell and pronounce his name. I know, I know. I only saw The English Patient as a movie and though I remember it knocked me out, I never got around to the book. I read The Cat's Table because of one of my reading groups.

Here is another book about which reviewers complain that "nothing happens." (So did most of my reading group members.) Factually it is not true. An eleven-year-old boy has been sent from Ceylon (now Sri Lanka) by ship to London, where he is to be reunited with his mother whom he has not seen for a number of years.

During the twenty-one day voyage, the boy makes two friends; boys of a similar age. Not one of the three has any adult traveling with him, so they become rather feral and get up to all manner of adventures, many of which are life-threatening. So you see, all those incidents happen.

The ship is carrying a prisoner in chains, a man dying of rabies, musicians, actors, and various mysterious personages as well as beautiful women. The three friends watch it all, absorbing what they can and imagining the rest. Therein lies the magic of this bittersweet novel. As narrator, the boy tells of this voyage from his adult remembrances, intermingling his further life with moments of perception about what he saw going down on that ship.

I think everyone has a defining incident or time period in life; something that determines one's future. Thus it was for this boy. From his position at the "cat's table" (ship slang for the least privileged place), so much happens to these boys in twenty-one days that it takes him decades to figure it all out.

Michael Ondaatje is apparently a poet. One could say he is primarily a poet: 11 books of poetry against 5 novels. Truly he writes like one, so beautifully. I found that at least in this novel, he is also a philosopher. During moments when "nothing is happening" he pens some of the deeper understandings about life I have read in a novel.

I enjoyed this book.

(The Cat's Table is available in hardcover by order from Once Upon A Time Bookstore.)