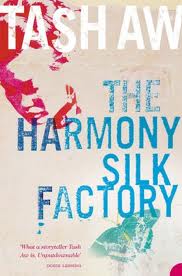 I don't believe I have read a novel set in Malaysia before. I admit I was a little vague on where that country is and had to look it up. Tash Aw made a big splash with this first novel. His third, Five Star Billionaire is being published in July and I decided it was time to investigate this author. It was a good decision.

The Harmony Silk Factory is the textiles store of Johnny Lim who came to Malaya with his peasant family from China in the early 20th century and rose up in business and politics. The novel is made up of three sections, each of which tell Johnny Lim's controversial story from a different perspective. Was he a hero of the people or a collaborator? What did he really sell from his imposing structure?

His son Jaspar, whose mother died during childbirth, sees his father as dishonest in both business and politics. Snow, the wife who died, left a diary in which she portrayed a man who loved his wife dearly but whose love was unrequited. Finally, Johnny's only true friend, Peter Wormwood, presents another side of the man from the viewpoint of an Englishman who had gone native.

At times I felt a bit adrift but could tell that the story of Johnny would come together like a jigsaw puzzle by the end. And it did, though I understood that knowing any individual is a matter of one's own perceptions and that others will see that individual in various other ways. The novel is a brilliant examination of that truth.

For me, the story was also another piece of the puzzle concerning life in the Far East during the 20th century. I suppose I could read more history books about the area but it is working just fine for me to use a historical timeline found somewhere on the web while I read novels. The interrelations of Chinese, Japanese, Vietnamese, Koreans, Malaysians, etc, come alive through the characters and their stories in novels as they rarely do for me when I read history.

It is the stories of the people that I find gripping and we are so fortunate to have had a publishing business to bring us these stories now for hundreds of years. Tash Aw was born in Taiwan to Malaysian parents, grew up in Malaysia, moved to England for university, became a lawyer and then a writer. He does not write like a lawyer, but like the great storytellers of the ages.

His next novel, Map of the Invisible World, 2009, is already on my shelves. I can't wait.

(Unbelievably, The Harmony Silk Factory is out of print. I found a copy at my local library. Hardcovers and paperbacks are available from used booksellers.)
Posted by Judy Krueger at 5:39 PM