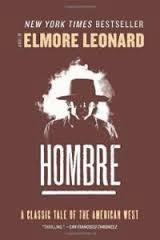 Somehow I thought this was Elmore Leonard's first novel. In fact, it was his fifth. He began publishing Westerns in 1953 with The Bounty Hunters. But for me Hombre is a good place to start.

Hombre was the name given to John Russell, a tough and fearless white man raised partly by Apaches. The story is set in Arizona mining country complete with stage coaches, outlaws, and a big pile of money over which the other main characters commit violence and crime.

I hadn't known that Leonard started out with Westerns. Though his style is not as flashy as it became, the voice is recognizable as is the timing of the plot and the hint of philosophy underlying it.

A movie version starring Paul Newman was released in 1967 but since I have not yet seen it, the climax in the novel came as a complete surprise to me. Hombre is a hero alright but with Elmore Leonard's brand on him.

(Hombre is available in paperback and eBook by order from Once Upon A Time Bookstore.)
Posted by Judy Krueger at 1:39 PM