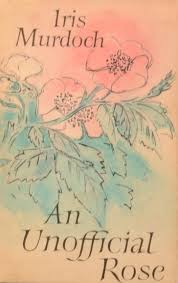 An Unofficial Rose, Iris Murdoch, Viking Press, 1962, 307 pp
Summary from Goodreads: After his wife's death, Hugh contemplates returning to his former mistress. His son, Randall, longs to abandon his shapeless marriage for a perfect partner. Randall's young daughter, Miranda, is adored by her Australian cousin Penn, but has attachments elsewhere. Her mother Ann has her own private dream, while taking upon herself the strains and pains of all the others. Impelled by affection, lust and illusion, these characters search for love within a tightly woven web.
My Review:
This is Iris Murdoch's sixth novel. I have read all six in the order in which she published them, as part of My Big Fat Reading Project. There is less humor in this one than in the earlier books but like all the others it is about moral quandaries and affairs of the heart.
The difficulty of marriage is the theme, with each major character either caught in an unsatisfactory marriage or wishing for a partner who can be truly loved. These yearnings take the form of actual infidelity or unrequited passion.
Though this may sound like any old romance novel, Ms Murdoch confounds those expectations by the depths of her characters and no happy endings for anyone. Two of the women are the scheming type with little compunction about controlling others to achieve their aims. Hugh, the widower and main character, is the victim of both women.
An unofficial rose is one that has been left wild rather than hybridized into the special cultivated sort loved by gardeners everywhere. Hugh's son Randall runs a commercial rose nursery on the grounds of his property. It is also his family's home inhabited by his long-suffering wife Ann and his devoted but precocious daughter Miranda.
Randall has lost the drive to keep the rose business going so Ann does most of the work. She knows her husband sees other women but adheres to her Christian belief that marriage is a lifelong commitment as well as a sacrament. She is, however, in love with another man herself. Is Ann the unofficial rose?
These and other characters from teens to parents to the older generation all do silly things in pursuit of love and passion. It is a fairly sexy book. Describing them all would take too long. You'd be better off reading the novel, as I am no Iris Murdoch. In a live interview from 1962, she makes it clear that she had no intention to write "comfort fiction." I like that about her because she delves into the discomforts of love and passion, yet you feel less a fool for some of the things you have done for both.
(An Unofficial Rose is out of print. I could not even find it in any of my libraries. It is available as an ebook from Open Road.)
Posted by Judy Krueger at 12:41 PM