THE STORY OF CIVILIZATION III: CAESAR AND CHRIST 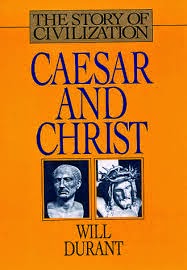 The Story of Civilization III: Caesar and Christ, Will Durant, Simon and Schuster, 1944, 672 pp

I have completed another milestone in my autodidact study of history. Caesar and Christ, which I have been reading off and on for three years, is quite a bit more about Caesar and Rome than it is about Jesus Christ and the beginnings of Christianity but there is good reason for that.

Early on in this volume on page 56 Durant lays out his thesis for the book: "The evolution of customs, morals, and ideas produced in one age the Stoic Cato, in a later age the Epicurean Nero, and at last transformed the Roman Empire into the Roman Church." I now understand in great detail how all of that came about.

The history of how a crossroads town called Rome became the Roman Empire reveals several aspects of the modern Western world. The Twelve Tables of laws written in 451 BC began what Durant calls Rome's greatest contribution to civilization: a legal structure. Another basic building block about which I have grave doubts was Rome's most basic institution: the patriarchal family in which the power of the father was almost absolute.

To my mind, a legal structure based on patriarchy inevitably leads to war. By war, empires are built but war depletes the empire building country and this sows the seeds of the empire's destruction. And so it goes. The empire of the United States of America, though it has taken a different form than that of the Roman Empire, is somewhere along that spectrum.

The most illumination in terms of my personal history came in the latter part of the book when Durant lays out the religious scene at the time when Christ lived on earth and makes clear how the spread of Christianity in its first 300 years incorporated elements of Judaism, Greek mysticism, Roman civilization, and many other spiritual beliefs and practices by the time its doctrine was codified.

Once Constantine, who was Emperor in the early 300s, converted to Christianity, which Durant considers possibly a consummate stroke of political wisdom, it was destined that the Church of Rome would succeed the Empire in ruling the Western world. That power may be waning today but it was the power that carried on Rome's government and civilization through the Dark Ages and beyond.

I understand Durant's thesis. His skill in making this part of history more clear to me leaves me in his debt. Next up is Volume IV: The Age of Faith, the longest in the series at 1086 pages. However long it takes me to read it, I know I have new revelations coming. At the risk of sounding like Plato, I feel it should be a requirement for world leaders to have studied these books or something similar.

Reviews of the earlier volumes:
Our Oriental Heritage
The Life of Greece

(The entire Story of Civilization Series is shockingly out of print, but the volumes can be found through used booksellers and in libraries.)

Email ThisBlogThis!Share to TwitterShare to FacebookShare to Pinterest
Labels: History