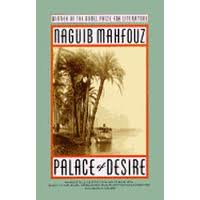 Palace of Desire, Naguib Mahfouz, Doubleday, 1957, (US translation 1991), 422 pp
In the second volume of his Cairo Trilogy (Palace Walk is the first), Naguib Mahfouz continues the story of Al-Sayyid Ahmad Abd al-Jawad and his family. All but one of his four children are now grown, married and living outside the home. There are in-laws and grandchildren, but they are all still very close and visit each other often. Egypt has not yet achieved independence from Great Britain but is moving through changes of political leaders and their perfidies.
I found this volume easier to read because this time I knew all the characters. Also the rate of change in each of their lives seemed to increase giving more impetus to the narrative. Al-Sayyid is still, at least in his own mind, the rigid, feared patriarch of the family, but in his other life of debauchery and women, he suffers setbacks due to his increasing age and decreasing health. He continues to take his long suffering wife for granted, to excuse his eldest son's despicable behavior and to torment his youngest son Kamal, whose idealism and innocence are incomprehensible to almost everyone.
I came to see more clearly the literary feat that Mahfouz pulled off in the trilogy. Imagine a trilogy of American novels that followed a family from 1900 to the middle of the 20th century, with all of the social and political changes. I am sure there are several examples of such, usually centered around a great American city. In the Cairo Trilogy, Mahfouz is creating an awareness of his country as it moved into the modern world.
(Palace of Desire is available in paperback by order from Once Upon A Time Bookstore.)
Posted by Judy Krueger at 8:32 PM