THUNDER ON THE RIGHT 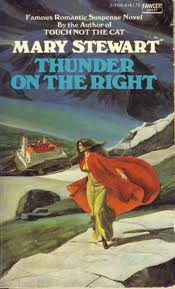 Thunder on the Right, Mary Stewart, William Morrow & Company, 1957, 284 pp
After realizing that Mary Stewart wrote a King Arthur trilogy (bestsellers in the 1970s and one of the few King Arthur series I have not read) I added her to the author list for My Big Fat Reading Project. Thunder on the Right, a murder mystery set in the south of France, is her third novel. Judging by the quality, I am content to start with it instead of going back to her first books as I usually do.
Jennifer Silver, raised in a comfortable but sheltered home in England, has come to the wild upper regions of the French Pyrenees on the border of Spain, hoping to deter her cousin Gillian from becoming a nun. Within one day of her arrival she has encountered an old flame and a murder. Her cousin has reportedly died in an auto accident and the convent of Our Lady of the Storms is embroiled in strange goings on.
With Stephen, the man who has secretly loved her for years, Jennifer plunges into scenes of inexplicable anomalies at the convent, meets a cruel and desperate smuggler hidden in the mountains, and carries on her investigations amid the wild weather of the region.
This is a fast read though a fairly improbable jumble of history, romance and mystery. It is so 1950s, with Jennifer running around on muddy mountain trails in a dress and Stephen showing up to save the day whenever she gets herself into impossibly dangerous situations.
Mary Stewart was clearly influenced by Daphne Du Maurier. She began to have bestsellers in 1967, so presumably by then she had honed her craft to a higher level, by publishing almost a book a year.
(Thunder on the Right is available in paperback by order from Once Upon A Time Bookstore.)
Posted by Judy Krueger at 12:05 PM