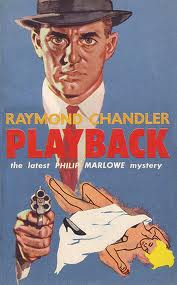 
This was Raymond Chandler's last novel, so now I have read them all. Back in 2002 when I read The Big Sleep and Farewell My Lovely, it was a whole new genre for me. I was thrilled to be reading about Los Angeles in the 1940s, chilled by the cynicism of Marlowe, and titillated to learn about the seamier side of my adopted city where the degraded, the insane and the rich make their connections.

Now that I have also read Denise Hamilton, Sara Paretsky, not to mention James M Cain, I can see where Chandler fits. I also recognize that Paretsky's V I Warshawski is a female Philip Marlowe. It has all been most enjoyable and the hard-boiled Marlowe with his soft center, looking for justice and true love, is like a modern day Robin Hood, in it for the diversion, not the money, while retaining the right to view mankind as a hopeless case.

Playback opens with Marlowe off on a wild goose chase, knowing no more than the reader why he is following a lush redhead from Grand Central Station to the California coast, except that he could make a few hundred bucks. Soon he is falling for her, protecting her from unknown sources of danger and getting hit over the head.

This novel was not one of his best. My favorites were Lady in the Lake and The Long Goodbye. But in each book Marlowe changes or develops as a person in intricate ways, just like a real human being does. Aside from the setting, plots and dialogue for which he is known, I think what sets Chandler above many others is the character, Philip Marlowe, who brings that humanity to the genre and thus raised the bar for writers who have succeeded him.

The final twist in Marlowe's psyche, which does not occur until about the last three pages, was just right.


(Playback is available in paperback by order from Once Upon A Time Bookstore.)