A RIPPLE FROM THE STORM 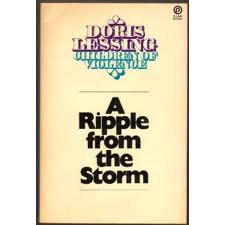 This is the third volume in Doris Lessing's "Children of Violence" series. I believe these novels are considered highly autobiographical and are meant to show a young woman trying to find herself as she moves out of her middle-class South African/English upbringing.

The first novel in the series, Martha Quest, shows her breaking away from the family to go live and work in the city. At the end of that one, Martha impulsively marries the first man who asks her. In the second, A Proper Marriage, Martha has a baby, struggles with expectations for her as a wife and mother, and by the end has left her husband and daughter to throw herself into left wing politics.

A Ripple from the Storm opens with a communist party meeting and in fact most of the book is taken up with meetings, squabbles, and party activities, all of which I found not very interesting. That may be because of all the other books I have read from the 1950s about people becoming disillusioned with communism.

My interest in A Ripple from the Storm was engaged whenever the story focused on Martha and other women in the story. Each one is moving through their individual ideas about self as they balance relationships with activism while continually running into male patriarchal attitudes. The question or problem of finding love with a man is an old one for women these days but many of Doris Lessing's observations on the subject remain pertinent and she has a unique viewpoint. She digs deeply into the lack of self that women must always deal with when trying to assert themselves as thinking, active members of the human race.

This volume ends with Martha in a quandary between two convictions: "One, it was inevitable that everything should have happened in exactly the way it had happened: no one could have behaved differently. Two, that everything that had happened was unreal, grotesque, and irrelevant." She feels overwhelmed with futility and falls asleep.

Clearly Doris Lessing did not give in to futility. She won the Nobel prize in 2007 and is still writing novels. So I look forward to what happens next.


(A Ripple from the Storm is available in paperback by order from Once Upon A Time Bookstore.)