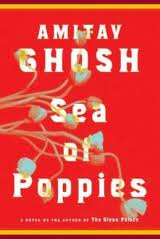 I have wanted to read this novel since it was published in 2008. It is the first of a trilogy. The second volume, River of Smoke, is being published in September, 2011.

Sea of Poppies is a wonderful book written somewhat in the style of Salman Rushdie with a bit of Charles Dickens thrown in. I was also reminded of some of the great historical fiction from the 1940s which I have read as part of My Big Fat Reading Project, especially Mika Waltari's The Egyptian and The Adventurer.

India, 1938, is in the clutches of the British and their template of empire building, the East India Company. Having converted most of India's agriculture to the raising of poppies, thus devastating the country's ability to feed her own people, the Company is gearing up for the Opium Wars with China. Free trade is the religion of empire building but the Chinese Emperor has objected to the systematic drugging of his populace and is attempting to control the importation of opium. Coming on the heels of the abolition of the slave trade, Britain's coffers are severely jeopardized.

That is the historical context from an Indian point of view and is educational as well as enlightening in terms of 19th century world history. Such issues were not addressed when I studied history in school. But the delight of Sea of Poppies arises from its characters. Here you have a destitute poppy grower, a deposed Raja, various indentured laborers, a sailor born of his slave mother and her master from Baltimore, MD, as well as various British mariners, businessmen and more.

All of these characters play roles in the manning up and filling with passengers of the Ibis, a ship destined for the Opium Wars. Despite such a large cast, you get to know most of them well and are seduced into caring about them. Their backgrounds, sorrows, hopes and dreams are the driving force of the story.

That is not all. Amitav Ghosh has also created a philosophical tale about change, migration and the intermingling of nationalities, social castes and language. His polyglot of tongues and slang come close to overwhelming the reader with unfamiliar words, but he does just enough explication and provides a glossary of sorts, so that you can satisfy your desperate desire to find out what happens next.

I love books like this. After reading plenty of contemporary literary fiction, which tends to dwell in small, almost claustrophobic worlds of towns, or single families, or one current event, reading Sea of Poppies is like embarking on a voyage on the open sea amongst passengers from many lands and backgrounds under a huge open expanse of sky.

As befits a traditional series, the book ends on a total cliffhanger, leaving you longing for the next installment. Thankfully, I've only got to wait a month or so.


(Sea of Poppies is available in paperback by order from Once Upon A Time Bookstore.)