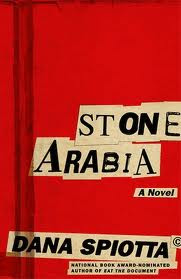 Dana Spiotta's third novel hit me so hard and deeply that I haven't been able to write about it for weeks. I won't rehash the plot because you can find that in numerous places on the Web. Briefly, it is a story about a musician and his younger sister in Los Angeles.

What it is really about is the life of a creative individual who was never recognized by the music industry or by pop culture. I would guess that such a fate is usual for a huge percentage of creative persons. Most of us take it more or less in stride, "move on" as they say, find other ways to make a living, sometimes do our creative thing as a hobby. Nik and his sister Denise never moved on.

I was surprised and delighted by Spiotta's previous novel, Eat the Document. In fact I think it was better written than Stone Arabia. But it was about revolutionary politics and its fallout in terms of the personal lives of those involved. I have never participated in anything remotely political, I don't like politics and don't think anyone can achieve positive societal change through it.

I do love music; have been a professional musician and songwriter. I do think that art, music, and literature can effect societal change. In fact, all I have ever truly desired to do in life is play music, read books and try to write both. I have had close to zero success with any of that.

Nik chose to retreat from life, hole up in a cabin in Topanga Canyon, work as a bartender and keep creating. He had about five fans, his sister Denise being number one.

What is success? How much does one person owe another? How true is memory? Is the life we see on television, in the news, more interesting, more impacting than our own little lives? What is creativity for? Big questions in a little book that reminds me, now that I think of it, of the early novels of Carolyn See (mother of Lisa See.) Spiotta says her inspiration as a writer comes from Don DeLillo.

I found Nik, Denise, Denise's daughter Ada, so annoying at times. Only after finishing the novel did I realize that I was supposed to be annoyed. This author gets under your skin and makes you look again at your cherished beliefs in new lights. It is an uncomfortable experience.

For me, she made it all right to feel really sad and discouraged about not having come even close to the dreams I had when I was young. Nik just refused to accept that fact. Whether Spiotta meant for it to happen or not, I ended up seeing him as some kind of tarnished hero.


(Stone Arabia is available in hardcover by order from Once Upon A Time Bookstore.)