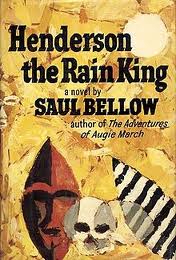 This is the fifth Saul Bellow novel I have read. I started with his first, The Dangling Man (1944) and moved along. I don't know that he is currently read much (and I don't know why), but I just love his novels. I would think that an author who won three National Book Awards, a Pulitzer, and the Nobel Prize should be an American treasure.

Henderson is a character who could only have been created by Bellow. Larger than life, literally and figuratively, socially embarrassing, personally challenged as a husband and a father, and richer than Croesus, he moves through life leaving a wake of disaster.

Due to various events including having become bored of being a pig farmer, Henderson decides to go to Africa, looking for adventure and personal redemption. He finds both, his well-intentioned but calamitous antics among the natives affording him access to tribal royalty.

As I read on, enjoying every page, I began to see that simmering below the picaresque and the improbable was satire of the highest order. Is this the year I learn to understand and appreciate satire? It keeps popping up in the most unexpected novels and I have learned that it must be tastefully done or it drives me mad.

So in 1959, Bellow published a novel that spoofs the mid-life crisis, the search for personal fulfillment, the African safari, and the American can-do attitude. At the same time, Henderson actually resolves his mid-life crisis, finds personal fulfillment, has the best ever safari (yes, there are lion hunts), and refines his American bull-headed ways.

How did he do that?

(Henderson the Rain King is available in paperback and on CD by order from Once Upon A Time Bookstore.)
Posted by Judy Krueger at 4:51 PM