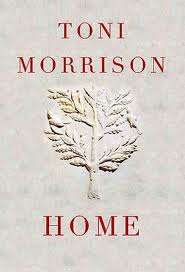 A new novel by Toni Morrison is always cause for celebration in my world. In her tenth novel, she follows the life of Frank Money who escaped from his small Georgia town by joining the army, as so many disenfranchised young men have done. He fought in the Korean War and returned to America traumatized and troubled, only to find the same old racism under which he had always lived.

Adrift, half crazy, he gets a message that his only sibling is at death's door. So he leaves the only person who has brought him peace to go to her rescue. He is an African American Odysseus.

Home is an exercise in restrained understatement, an exposition of Toni Morrison's recurring themes that morphs from the tale of a black man who fought for freedom to the story of a black woman who learns the true price of freedom.

It seems to me that ever since Toni Morrison became the first African American woman to win the Nobel Prize for literature, literary critics have mostly criticized the novels she has written. Paradise-heavy-handed foreshadowing and contrived plot devices; Love-haphazard; A Mercy-fared better but some complained it was too slight. Home has been called too short, too plain, too simple, lacking emotion.

I admire this writer. I am enthralled by anything she writes. Judging by reader review in such places as Amazon and Goodreads, so do most readers. Thankfully she does not write for the critics. She obviously writes for readers.

Home reads like a blues song, like an epic poem. It has a symmetry and balance which sang to me as a former songwriter. It is in fact short, it is not on the surface "luminous" or "lyrical," but like any classic epic or song, it moves along, circles back, and tells of lives being lived and lessons being learned.