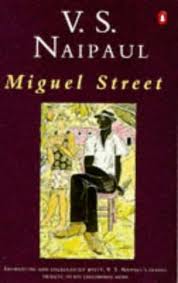 Miguel Street was the third novel published by V S Naipaul, except that it is not really a novel. He wrote this collection of vignettes before he had published any novels, so it makes sense that it is actually composed of short stories about different characters who live on this street in Port of Spain, Trinidad. Through the eyes of a young boy, we experience the life of the street.

I like Naipaul's writing style so I didn't mind reading the book, though there is no plot. I assume he was warming up for his first two actual novels: The Mystic Masseur and The Suffrage of Elvira. Because I had already read and enjoyed those I felt at home in Port of Spain.

Now I am looking forward to his breakout novel A House for Mr Biswas, published in 1961.

(Miguel Street is available in paperback and Google eBook by order from Once Upon A Time Bookstore.)