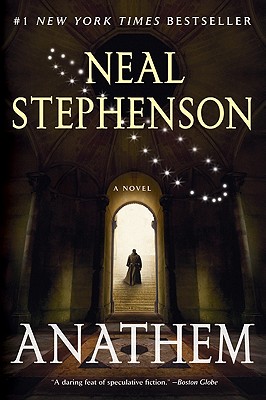 Anathem, Neal Stephenson, HarperCollins, 2008, 935 pp
Since I have not been working on my writing during the pandemic, I figure I can at least squeeze in a few more reviews. I know I have followers who like Neal Stephenson and this one was up there with my favorite reads lately, so here you go.
Another Neal chunkster read! Anathem followed the last one I read: The System of the World. After writing three novels set in the 17th and 18th centuries, he surged way ahead to the year 3000!

The book got mixed reactions when it was published in 2008, even from some of his most diehard fans. My husband advised me that I did not need to waste my time.

I felt my time was well spent, even though it included flipping to an extensive glossary of terms. All the scientists, philosophers and mathematicians are cloistered off in coed monasteries where they study and discuss endlessly their theories while maintaining a wobbly relation with the outside world.
That other world includes the illiterate, irrational, unpredictable people, living on fast food and glued to their devices. There are some exceptions though.

There is a system by which new generations are brought into the monastery setting, since the fras and surs take a vow not to reproduce. I liked the long view on how these new generations are selected and trained.  Various regulations cannot prevent rivalries and tensions, even rebellion within the walls, which made all those characters human after all.

Of course, this is Neal Stephenson, so there has to be more to the book than philosophical and scientific discussion, though despite some great ideas there is maybe a bit too much of that. Sure enough an alien spacecraft lands and the secular powers are so overcome with fear that they must call on the wise guys to help deal with the menace.

Wild adventures ensue including space travel and first contact and all manner of life threatening capers. Also the the scientists, philosophers and mathematicians of all ages get to put their knowledge to the test, including quantum theories as applied to other worlds.

I found it all absorbing, original in many ways, and clever as can be.