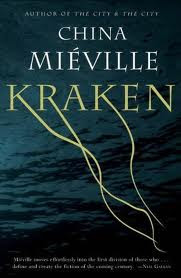 I finished Kraken over two weeks ago and had to return it to the library before I had a chance to write about it. Now I have to dig my thoughts out from beneath the several books I have read since then.

Although I have become a raving fan of China Mieville and will read the rest of his earlier books as well as anything he writes in the future, Kraken did not move me as much as either The City & the City or Embassytown. It was too something: too long, too drawn out and disjointed. It was also an insane story about the capture of a preserved giant squid that was the god of a religion.

As usual in Mieville, there is a reluctant hero and plenty of good ideas. My favorite character was the female cop, whose name I now do not remember. I also like the little god who could only exist in statues, including gargoyles and Star Wars plastic dolls.

I think you'd have to be a dedicated Mieville reader to get through Kraken. At least that is how I got to the end. The end is quite good and I was worried about that.

Go ahead. Hit me with your comments, disagreements or whatever.


(Kraken is available in paperback by order from Once Upon A Time Bookstore.)