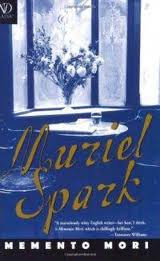 Novel number three by Muriel Spark is just as odd and fitful as the first two. This time she takes on old age, though she was barely 40 when she wrote it. I can't say that reading Spark is pleasurable but it is never boring. She just comes out and has her characters do and say things that most of us would rather not admit to, though we all do and say such things ourselves. No one enjoys being made to look foolish but Spark almost makes the reader enjoy it.

Several elderly characters are receiving anonymous phone calls reminding them that they must die. I have observed that the elderly, though they may be beset by ailments, regrets, and worries, do not really believe they are going to die anymore than the young do. They need reminding I suppose.

The novel is mostly peopled with a large cast of older people, some sick, some senile, some outrageous, all annoying in their own ways. Whether well off or poor, employer or employee, each one is fulfilling the logical outcome of the personality he or she has always had.

Old secrets of the heart come to light, a former maid tries to get a will written in her favor, and a retired sociologist carries on a scientific study of the aged. Just when I was getting weary of gerontological novels of the current day (Emily Alone, Turn of Mind), I read Memento Mori and realized that even fifty years ago in England, old age was a subject about which we must laugh or else we would cry.


(Memento Mori is available in paperback by order from Once Upon A Time Bookstore.)