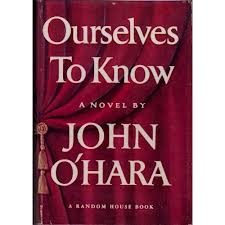 Either John O'Hara got better as the years went by or I am getting to know him better as an author. This novel earned him the #5 spot of the 1960 bestseller list and I liked it more than his earlier novels.

He works over most of the tropes found in the popular fiction of 1960: sex, psychological insight, homosexuality, and bad women. The main character is one of the richest men in his small eastern Pennsylvania community. He has issues, especially with women. When in his forties, he marries a 19-year-old sex-crazed woman and eventually murders her. (No spoiler: you learn about the murder early in the book.)

Though he kept me turning the pages and took various turns I wasn't expecting, I was bothered because the guy got away with it due to his wealth and connections. Certainly the double standard when it comes to women and sex was in full force in the early 20th century when the story takes place. But it still enrages me to read about it. If he had killed his wife's lover he probably would have been sent to prison, but it was "understandable" that he would murder an unfaithful wife. End of rant.

The psychological portrait of the protagonist was more interesting to me as well as a sort of meta-fictional technique which put the reader into the consciousness of the man telling the story.

O'Hara claimed that he wrote to record what American life was like before World War II and I suppose he did. At the same time he was obviously keeping up with literary trends and sneaking them into his potboilerish best sellers. He was no Thomas Wolfe or William Faulkner, but he tried hard to make the grade.

(Ourselves to Know is out of print, available at libraries and from used book sellers.)