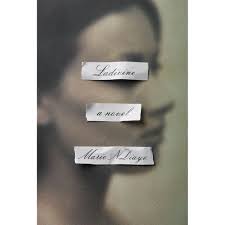 Ladivine, Marie NDiaye, Alfred A Knopf, 2016, 276 pp (translated from the French by Jordan Stump
Summary from Goodreads (spoiler removed): On the first Tuesday of every month, Clarisse Rivière leaves her husband and young daughter and secretly takes the train to Bordeaux to visit her mother, Ladivine. Just as Clarisse’s husband and daughter know nothing of Ladivine, Clarisse herself has hidden nearly every aspect of her adult life from this woman, whom she dreads and despises but also pities. Long ago abandoned by Clarisse’s father, Ladivine works as a housecleaner and has no one but her daughter, whom she knows as Malinka.

After more than twenty-five years of this deception, the idyllic middle-class existence Clarisse has built from scratch can no longer survive inside the walls she’s put up to protect it. Her untold anguish leaves her cold and guarded, her loved ones forever trapped outside, looking in. When her husband, Richard, finally leaves her, Clarisse finds comfort in the embrace of a volatile local man, Freddy Moliger. With Freddy, she finally feels reconciled to, or at least at ease with, her true self. But this peace comes at a terrible price.
My Review:
Marie NDiaye's second translated novel is not as raw as Three Strong Women but is equally powerful and disturbing.
Malinka is the daughter of a Black African immigrant, Ladivine. Her mother is poor, she works as cleaning woman and gives her entire life and self in service to her daughter. Malinka is so fair she can pass as white and she feels deeply ashamed of Ladivine. In fact she calls her "the servant."
After leaving home, she changes her name to Clarisse, falls in love with a white French man and marries him. Though she loves him and their daughter, she never assumes any identity as Clarisse except as wife and mother. She strives for perfection in those roles but it is impossible for her husband or daughter to really know her.
Once a month she sneaks away to visit her mother. The story opens during one of those visits and then circles back to the story of her life up to that point. Already as a reader you are disturbed and filled with anxiety.
Eventually the husband leaves her, frustrated with his inability to ever penetrate his wife's polished exterior, yet still completely in love with her. Clarisse is devastated with loss. Her daughter, whom she named Ladivine after her mother, goes away to school and then marries a German man.
After all this, the story gets weirder than weird. Strange inexplicable things happen, tragedy strikes Clarisse/Malinka while Ladivine, the daughter, has her own crisis of identity. As a reader, I was never prepared for what happened next and could not imagine how the story would end.
I was right. I never imagined any of it. I was putty in the hands of a master story teller, compelled to suspend my disbelief over and over. I loved every minute of it!
(Ladivine is available in hard cover and audio book by order from Once Upon A Time Bookstore.)
Posted by Judy Krueger at 1:06 PM