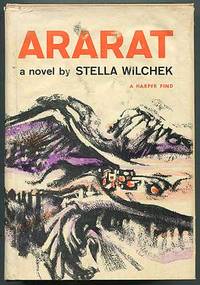 Ararat, Stella Wilchek, Harper, 1962, 561 pp
Some years ago I stumbled upon a book by this author entitled Judith. Since that is my name and since "Judith" is a book from the Apocrypha, I decided to read it and recall it fondly. It tells the story of that infamous Hebrew woman who murdered Holofernes, an incident that inspired the famous "Judith Beheading Holofernes" painting by Carravagio. I loved the novel and intend to read it again when I get to my 1965 list.
All of Stella Wilchek's four novels are out of print and there is little information about her on the internet. She was born in Austria in 1922, apparently escaped the Holocaust, and died in 1997 in America. She wrote well, was obviously highly educated, and was celebrated as an early feminist novelist. Perhaps she was ahead of her time because after Judith she disappeared from the publishing world.

Ararat is the story of a small group of Austrian Jews who emigrated to the fictional South American town, El Paramo, in 1939, intending to wait out the war. Their escape, journey and trials are related through the diary of Professor Bernstein, a somewhat unreliable narrator with a detached, wryly humorous tone. He observes the daily lives of several different families in great detail, giving a picture of an intensely small community set adrift in a foreign culture.

The people rely on rumor and gossip; they compete in various ventures as they try to make enough money to survive. The consciousness of themselves as Jews, as persecuted outcasts, and as people who have lost their country and livelihoods permeate the novel.

The mountains, the natives, and the extraordinary weather of the Andean country in which they find themselves, all play into creating an atmosphere I have rarely found in any novel. (Although The Marriage of Opposites by Alice Hoffman, which I read last year, does tell a similar story.)

Eva, the 17 year old wife of Walter Kramer (he being the son of one of the most prominent families) is beautiful, sensual and a born female rebel. She is clearly one of the author's favorite characters and was mine as well. Refusing to be tamed, she has several affairs, drives her mother-in-law crazy and defies her husband. She reminded me of Mathilde in Lauren Groff's Fates and Furies, with her coldblooded approach to men, love and personal fulfillment, though the stories of these women play out so differently. Eva also put me in mind of Lila in Elena Ferrante's Neapolitan novels.

In fact, all of these novels have soap operatic qualities due to the emotional minutiae and the almost claustrophobic intensity of personal interactions. I conclude that despite wars and politics and financial issues in the macrocosm of life, it is these intimate details of life that keep us from dying of boredom or heartbreak in this vale of tears we inhabit.

(Ararat is out of print but can be obtained through used book sellers on line.)
Posted by Judy Krueger at 11:42 AM