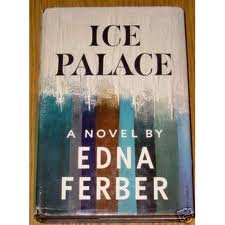 Ice Palace, Edna Ferber, Doubleday & Company, 1958, 351 pp
This is one of the better Edna Ferber books I have read. By 1958, she had been writing novels for over 40 years and it shows. Her setting this time is Alaska, in the fictional town of Baranof during the years just preceding Alaska's admission to statehood in 1959. It was #7 on the bestseller list for 1958.
The characters are good and richly created. Christine Storm, born in the midst of severe weather, is central to the story. Her parents died before she turned one year old and she was raised by opposing grandfathers. Grandpa "Czar" Kennedy has made a fortune out of the territory and wields considerable political power. Grandpa Storm, who loves Alaska for its grandeur, its varied peoples, its wild potential for freedom, runs a widely read newspaper and is a philosopher of sorts.
Many men are in love with the beautiful, intelligent and free-spirited Christine. Her story illustrates the conflicting teachings of her grandfathers. Will Alaska gain statehood and thus more control over its destiny or will it be raped and plundered by big business for its abounding natural resources? Even though we now know the answer to those questions, it is exciting to read about what it was like for Alaskans in the mid 1950s.
If you want the in depth story, I dare you to wade through James Michener's Alaska, published in 1988. For a more condensed version and an enjoyable quick read, Ice Palace will do just fine.
(There is a hardcover version of Ice Palace available on Amazon and at Powell's, but for some reason it costs $29.95. I would suggest your local library.)
Posted by Judy Krueger at 11:14 AM