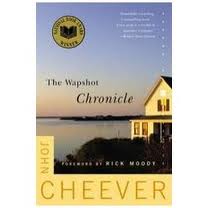 The Wapshot Chronicle, John Cheever, Harper & Row Publishers, 1957, 307 pp
John Cheever is best known for his short stories, but his first novel won the National Book Award in 1958. I was expecting one of those John O'Hara or John Marquand novels because I had gotten the idea Cheever was a "New Yorker" favorite. Instead, I was pleasantly surprised.
The Wapshot family has lived for generations in a New England village which began as a sailing port. By the time of the novel, it is a dying town and the fading family lives mostly for tradition. Leander Wapshot, the current head of the family, likes to fish and take out the SS Topaze, a decrepit old launch, picking up passengers from the train in the next small town and ferrying them across the bay to an amusement park. He also keeps up the family chronicle started by a forebear generations earlier.
The money which is left in the family belongs to Leander's sister, a spinster who is even more eccentric that he is. Leander's two sons realize as they come of age, that Aunt Honora will only leave the money to them if they make something of themselves and produce sons. Since there are no prospects for either requirement in the small town, they set off into the world to seek careers and women.
Because of Cheever's incredibly fluid style, his sense of humor and his unique characters, The Wapshot Chronicle is a great read. In fact, it stands out as the best NBA winner since the award began in 1950. (That is my opinion, but I have read them all.) He has captured the essence of that area of New England just north of New York City which is now filled with bedroom communities for people with families who work in the city. The Wapshots are right on the cusp of the changing fortunes of that area and Cheever presents them without sentimentality or heaviness but with heart, honoring a bygone era and type of people as they make their stumbling transition into the 20th century.
(The Wapshot Chronicle is available in paperback by order from Once Upon A Time Bookstore.)
Posted by Judy Krueger at 10:24 AM