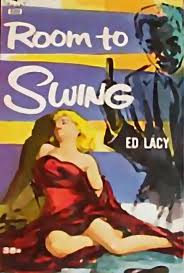 Room to Swing, Ed Lacy, Harper, 1957, 177 pp
As part of My Big Fat Reading Project, I read the major award winning books from each year. The Edgar Award for mystery writing began in 1954. Aside from Raymond Chandler in 1955, none of the winning authors have stood the test of time. I had not heard of Ed Lacy before though he had a good reputation in the 1950s and has recently been brought back into reprint.
Ed Lacy is a pseudonym for crime writer Leonard Zinberg, a New Yorker, professional writer, political leftist and all around character. His lifelong interest in African American culture and leftist politics stemmed from his Jewish upbringing in 1920s Manhattan, on the fringes of Harlem. His wife was African American and many of his early stories concerned racial injustice.
In 1951, Zinberg published his first mystery as Ed Lacy, but it was Room to Swing with the first credible African American PI which brought him critical praise and the Edgar Award in 1958.
Touissant "Touie" Marcus Moore is living on the edge in a small apartment in Harlem, which doubles as his office, trying to make it as a private investigator. On a day when his funds are particularly low, he is lured into a TV promotional operation by a hot redhead who considers herself "sympathetic" to Negroes. Next thing he knows, Marcus is a murder suspect and must find the actual murderer in order to save himself.
He follows the trail of evidence to a small southern Ohio town. Lacy gets the Jim Crow elements of 1950s Ohio just right while he throws in some excellent Raymond Chandler style metaphors. A nice little love story develops in Ohio and bubbles beneath the surface of a fine mystery with some unusual quirks.
(Room to Swing is available in a nice paperback reprint by order from Once Upon A Time Bookstore.)
Posted by Judy Krueger at 12:12 PM