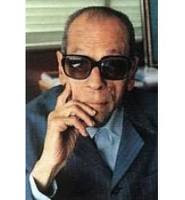 Naguib Mahfouz was born 100 years ago yesterday. He is credited as one of the first modern novelists of Egypt and one of the first writers of contemporary Arabic literature. He published over 50 novels beginning in the 1930s, but was not translated into English until around 1970. In 1988 he won the Nobel Prize for Literature after which many of his novels began to appear in English.

In 1999 I read The Memoirs of Cleopatra, a novel by Margaret George. Around that time I also read Wilbur Smith's River God. After reading The Egyptian by Mika Waltari in 2005, I suddenly began to wonder how Egypt of the Egyptian empire became the Egypt of today. I made a quick study of the history of Egypt on Wikipedia, just enough to feel overwhelmed by the county's long and tumultuous story. By that time I had heard of Mahfouz because his Cairo Trilogy had been translated into English, a project overseen in part by Jackie Kennedy Onassis during her stint as an editor at Doubleday Books. Each volume was conspicuously reviewed as it was released and Mahfouz became widely known in the United States for the first time.

Mahfouz wrote his novels about contemporary times in Cairo with his overall theme being the impact of social change on the lives of ordinary people. If you wish to learn what it has been like to be an Egyptian person since the 1930s, reading Mahfouz will give you that insight.

I first read Midaq Alley, published in Egypt in 1947, in the United States by Doubleday in 1966. I entered a world of eccentric characters living in an alley in the old section of Cairo during World War II. The influence of Western culture, particularly British, was gradually eroding the religious faith and morals of these people, causing conflict between generations and the sexes. I became a fan.

I have since read The Beginning and the End, from 1947 and the entire Cairo Trilogy: Palace Walk, Palace of Desire, & Sugar Street. Once I became accustomed to Mahfouz's pace and style, his characters and their lives captured my interest. I intend to read through all of his novels that are available in English as I move through My Big Fat Reading Project.

In 1994 an attempted assassination by Islamic extremists reduced Mahfouz to ill health leaving him unable to write for more than a few minutes a day. He lived for twelve more years under constant bodyguard protection. He was the oldest living Noble Literature laureate, the third oldest of all time and the only Arabic language writer to win the prize.
Posted by Judy Krueger at 11:06 AM