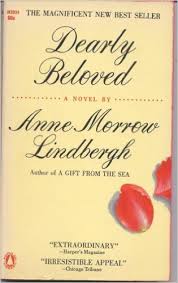 Dearly Beloved, Anne Morrow Lindbergh, Harcourt Brace & World, 1962, 202 pp
Summary from Goodreads: A June wedding sets the scene for Anne Morrow Lindbergh’s bestselling novel, Dearly Beloved. The ceremony is a great moment during which the “gathered together” survey not just this couple, this occasion, but their own lives, hopes, and fears. As the family and guests follow the familiar marriage service, they are stirred to new insights—on love, on marriage, and on all the stages of development involved.
My Review:
At #2 on the bestseller list for 1962, Dearly Beloved is a meditation on marriage. It takes place on one day during a marriage ceremony. Each chapter takes the voice of one member of the wedding party or one of the guests, thus covering many and various views of marriage and a look at different marriages that succeeded or failed.
I was worried going in that this would be a sappy, religious screed but it wasn't. I found it surprisingly modern (for the times) even though the author clearly supports the institution. She also clearly recognized the pitfalls showing that the act of getting married does not guarantee marital bliss.
Once again I have read a book from 1962 that falls into a common theme in that year. It is another harbinger of change coming as regards women, the family, and sex. For some reason there are not chapters from the viewpoint of the bride or groom. Though the book is short, I got bored about halfway through but I did admire the concept.
Anne Morrow Lindbergh was the wife of aviator Charles Lindbergh. They suffered the kidnapping and death of their first child in 1932, but went on to have several more children. Anne was Charles's co-pilot and a seemingly indefatigable person.
In addition to everything else she was a prolific writer. They both had affairs outside of marriage and Charles was labeled a Fascist for a time during WWII. She had plenty of experience to draw on for Dearly Beloved though the book is tame in comparison.
Now I am so curious about this author. Melanie Benjamin (The Swans of Fifth Avenue) published The Aviator's Wife in 2013, a fictional account of Anne's life. I am suspicious of all these "wife novels" as I call them. They just keep coming. But now I am thinking I might read this one. Has anyone read it?
(Dearly Beloved is out of print. I found a copy at my library.)
Posted by Judy Krueger at 2:00 PM