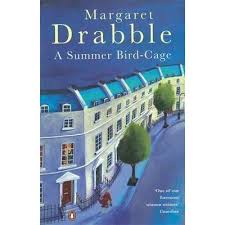 A Summer Bird-Cage, Margaret Drabble, William Morrow & Company, 1962, 224 pp
One of the pleasures of the 1962 list in My Big Fat Reading Project has been reading first novels by authors I have always wanted to read or authors whose later novels I have read.

Margaret Drabble is the sister of A S Byatt. In the usual way of the media, much has been made over the years about their sibling rivalry. Actually both women have been outspoken about this in interviews and though both are highly acclaimed British novelists still publishing novels, they still don't get along. I get it. I have such a sister.

Another theme in novels by women published in 1962 is a growing awareness of a woman's place in society and in marriage, which would eventually become the Feminist movement, although that question has come up sporadically in novels I have read from earlier years.

Examples: The Golden Notebook by Doris Lessing, Love and Friendship by Alison Lurie, An Unofficial Rose by Iris Murdoch.

A Summer Bird-Cage falls into both categories. Sarah, the main character, is a recent Oxford graduate who is working out for herself how to fit her high level of intelligence into adult life. She can't settle on a career, she can't find a man to love, and she is watching other women for clues. Her older sister Louise has always been a torment to her.

As the novel opens, she has been called home for Louise's wedding. All the years of enmity are still there. Louise got the beauty, Sarah the brains. Puzzling to Sarah is why her sister is marrying an older successful novelist who is also a rather despicable man. Did she marry him for his money?

Over the course of a year, she sees the marriages of both her best friend and her sister fall apart as she grapples with her own identity as a woman and as an aspiring writer. The shift of power between the sisters is the most fascinating aspect of the story.

I have read countless novels about this very thing and usually find them good because the relationships between women and sisters are interesting to me and resonate with my experience. What I found exhilarating in this one was the excellent writing. Drabble (only 25 when this first novel was published) is unabashed when it comes to demonstrating her own intelligence. The tone of the writing is modern with an emphasis on dialogue that reads the way people actually talk.

I want more of Margaret Drabble!

(The Summer Bird-Cage is out of print but can be purchased as a used book or an eboook. I found my copy at the library.)
Posted by Judy Krueger at 9:54 AM