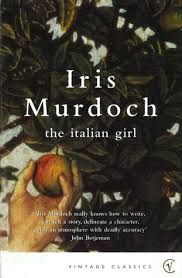 The Italian Girl, Iris Murdoch, Viking Press, 1964, 171 pp
Summary from Goodreads: Edmund has escaped from his family into a lonely life. Returning for his mother's funeral he finds himself involved in the old, awful problems, together with some new ones. One by one his relatives reveal their secrets to a reluctant Edmund: illicit affairs, hidden passions, shameful scandals. At the heart of all, there is, as always, the family's loyal servant, the Italian girl.
My Review:
This is Iris Murdoch's eighth novel. I have been reading her novels in order of publication and become quite a fan. She brings a philosophical bent to her fiction. Though the next book for me would have been The Unicorn, one of my reading groups picked this one so I set aside my OCD tendency and went with it. Some critics have considered it one of her weakest novels. I liked it just fine.
The younger son, Edmund, has come home due to the death of his mother and tells the story with wistful viewpoints of each member of the household. Lydia, the deceased mother, had been controlling and no longer interested in her husband (now deceased) once she had two sons. She was overly possessive of the boys in alternating periods. Otto, the older brother, still lives in the family home with his wife Isabel and daughter Flora, now a teenager.
In Murdoch's usual way, the details of the family come into focus like a developing photograph until you have a distressing picture of psychological disturbance and broken relationships. Edmund, no surprise, has trouble with females, never married, and is possibly still a virgin. Otto drinks, is vegetarian, and works unsuccessfully as an engraver, mostly making tombstones. He has always had criminal-type assistants who cause trouble and are then replaced.
Otto's wife, it turns out, is having an affair with the current assistant, David, who has also been sleeping with the daughter and gotten her pregnant. Otto is sleeping with David's mysterious and troubled sister. Quite a mess but this is one of Murdoch's typical families. Edmund's pathetic attempts to help these people all go awry, almost to the point of comedy. Dark comedy is another facet of Murdoch's fiction.
The title is the key to this fractured family, but you don't find out the full significance of the Italian girl until the very end. All you know until then is that the family has had a series of Italian girls as servants. These girls do all the housework, raised the boys when the mother needed a break, and served as companion to mother. The mystery of this arrangement is the big reveal at the end.

I found the novel to be one of her most exquisitely written books. Each scene is carefully drawn with lovely descriptions that create atmosphere and allow you to see ever more deeply into the characters. In fact, it was adapted for the stage by James Saunders and originally performed in 1968.

In spite of there being not a single likeable character, I felt for them all. Murdoch seems to be telling us that in any family there are secrets. Secrets of the heart due to failures to connect, unawareness of what goes on, a lack of perspective caused by the claustrophobia of family. I have found that to be true in most families I know, even the good ones.


The Italian Girl is hard to find in paper; used book retailers do have it. It is also available as an ebook through Open Road.
Posted by Judy Krueger at 12:51 PM