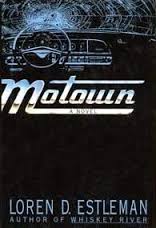 Motown, Loren D Estleman, Bantam Books, 1991, 292 pp
Last year I read Estleman's first book in his Detroit series, Whiskey River, and found it highly entertaining. Motown is the second in the series and was just as exciting. I like to intersperse mysteries and crime thrillers with the more literary and deep stuff I usually read.
Motown is about the automobile industry in Detroit in the 1960s when challenges arose against those famous cars built with horsepower, fins, and meant for speed but death traps in any accident.

Rick Avery is an ex-cop who is at loose ends. His passion is cars and he can fix any of those Detroit cars. The biggest auto manufacturer (unnamed but Ford Motor Company, of course) hires him to go undercover and find some dirt on an increasingly vocal consumer advocate who is crying out for safety regulations.

Today we take for granted seat belts, air-bags, windshields that blow out instead of shatter, and hoods that don't crush on impact. In 1966, the manufacturers didn't want anything to interfere with the flow of cars coming off the assembly line nor the flow of money coming in. The Union didn't want workers laid off while the necessary retooling was done.

Meanwhile, a descendant of one of the gangsters in Whiskey River is trying to take the numbers racket away from Detroit Negroes (as they were called then.) Black Power is on the rise, riots have already blown up in major American cities, and Inspector Lew Canada is doing his best to keep a lid on the racial tensions that will spark the Detroit riots of summer 1967.

(Motown is out of print but can be found in eBook form, libraries, and through used book sellers.)
Posted by Judy Krueger at 12:50 PM