THE TREE OF MAN 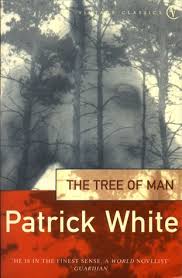 The Tree of Man, Patrick White, Viking Press, 1955, 480 pp
Patrick White was an Australian novelist who won the Nobel Prize for Literature in 1973. My friend and I of the newly formed Literary Snobs reading group picked this book for our first meeting. Not many people write like this anymore. His prose is highly literary, filled with poetical passages and lyrical descriptions of place, weather, and characters.
The Tree of Man follows the life of one man in almost completely chronological order from childhood to death. All along the way, the author adds in pithy moments of truth about human life delivered both from the main characters' points of view as well as from his close third person narration. The pace is generally as leisurely as a sunrise or sunset in the Australian outback but there are occasional spurts of action which ramp up the reader's speed of turning the pages.

Stan Parker is a loner who had inherited a piece of land in the undeveloped hills outside of Sydney. The book opens as he arrives on the land at about the age of twenty. Sixty years or so later when he dies his humble home is one of the last original structures still standing in what has become the suburbs of Sydney. He had picked up an orphan from the nearest town and married her. Amy is another type of loner but together they evolved a love that brought them through parenthood and plenty of disappointments. They do not come through unscathed yet somehow maintain a tenacious grip on life through stoicism, continuous grueling hard work on their dairy farm, and a rather twitchy sort of loyalty to each other.

In any life, the majority of days and nights comprise a tedious, boring repetitiveness enlivened by the usual momentous events, such as falling in love, births, extreme weather, wars, betrayals, and deaths. Thus, reading this book for me was not unlike living, though I have not experienced a pioneer life of backbreaking labor.

Life also contains periods of emotional and psychological upheaval that bring to the forefront the dark side of any personality. When Stan and particularly Amy experience such periods the writing plumbs that darkness with an unflinching gaze. At those points in the novel, I felt like Joyce Carol Oates had grabbed the pen.

It was a mixed reading experience made up of wonder, tedium, and moments of personal enlightenment. I am fairly eclectic and embracive in my reading so I let Patrick White determine my reading speed and my emotional balance for the many hours spent with his book. I will say that not once did I not believe him. In the next to last chapter, when Stan dies, I felt Amy's feelings. You expect death, you are powerless before it, and yet life goes on if not much longer in yourself, then in your offspring.

If his other novels are anything like this then he deserved his prize. The banality of human life is everywhere around us and he was able to describe that as well as clothe it with the beautiful and poetic essence that gets us through.

(The Tree of Man is out of print. Even my library did not have a copy nor has it been made into an eBook so far. I found my copy at Abe Books in paperback.)
Posted by Judy Krueger at 10:09 AM