MR STONE AND THE KNIGHTS COMPANION 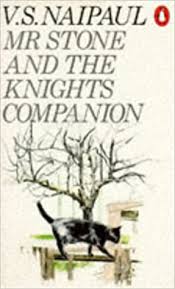 Mr Stone and the Knights Companion, V S Naipaul, Penguin, 1963, 160 pp
V S Naipaul is one of the authors I am following in My Big Fat Reading Project. His fifth novel marks a change in his life but maintains the themes of his first four novels which were set in Trinidad, where he was born as a descendant of people brought there by the British from India and indentured to fill certain positions. This novel is set in London.
What I have liked about Naipaul so far is his incisive, mostly uncomplimentary approach to characters, society, and politics. I will see as I continue to read him, but I suspect it is that quality which garnered him the Nobel Prize. It certainly applies to his 1963 novel.
Mr Stone is so very British, so much so that he is almost a caricature. I felt that Naipaul created him out of a foreigner's viewpoint which indeed he was when he came to Oxford for his university education in the early 1950s. I also felt that he was probably trying to imitate some of the more renowned British writers of those times.

A long-time bachelor in a lowly job, nearing retirement, Mr Stone suddenly marries a widow, the former Mrs Springer, whom he met at a party. A year of adjustment follows in which she takes over his household. One night in his study, he is pondering his approaching retirement and another sudden change comes over him. He creates the idea of the Knights Companion, a sort of fraternal organization of which the members will go about visiting and giving aid to retired men.

After a fevered few nights writing up his idea, he presents it to the head of his company as a program to bring goodwill to the business. He is promoted, becomes a department head with his own staff, and the plan is a huge success. Of course there are still bumps in the road; certain upsets and dishonest actions he must smooth out and a public relations man who tries to and in the end does steal his thunder.

I say that Naipaul's themes remain because once again he has created a hapless male, alternately puffed up and failing, insensitive to and troubled by women, who tries to buck an entrenched system. He is still incisive and tragicomic.

Naipaul in later years has suffered from the ravages of public opinion, labeled as racist and misogynist. I don't doubt the charges. I read him because I am female and he is male. He shows me a male viewpoint of a certain stripe and I find it fascinating no matter how off-putting it may be.