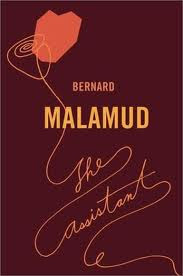 The Assistant, Bernard Malamud, Farrar Straus and Giroux, 1957, 246 pp
I quite liked Malamud's first novel, The Natural. This is his second novel and I liked it less.
A poverty-stricken Jewish man runs a failing grocery store in Brooklyn. He is presented as a failure of a man. All he knows is dogged persistence and hard work. He considers himself unlucky, but actually he lacks the killer instinct needed for business success. He is an immigrant from Russian pogroms, his wife is a nag, he lost a son when that boy was young and has a grown daughter who would have liked to go to college but works as a lowly secretary to help support the family.
The "assistant" is a non-Jewish orphan who has never succeeded at anything and has become a petty criminal. Due to various occurrences these two men enter into a relationship which is more like a deathlock, when the store owner hires the other as his assistant.
The one thing I admired about this dark tale was the way the author would tease the reader into hoping that life would improve for these characters and then would dash those hopes as the fatal flaws of each sent them back to paths of hopelessness and destruction. Somehow, Malamud does this over and over, managing to raise the hope each time.
When it all ended, I felt I'd been had. I concluded that the author's theme was that there were other sides to life than the happy, hopeful ideals of the 1950s.
(The Assistant is available by order from Once Upon A Time Bookstore.)
Posted by Judy Krueger at 1:28 PM