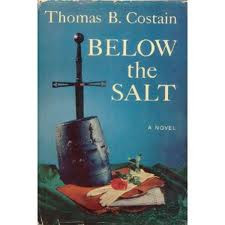 Below the Salt, Thomas B Costain, Doubleday & Company, 1957, 480 pp
About ten years ago, I decided I would like to learn the history of England. I got a straight ahead history text, started to read and soon gave up, defeated by the dry recitation of kings and battles. Such decisions have a way of infecting a life however. Because of the preponderance of historical fiction on the bestseller lists of the 1940s and 1950s, I have begun to get familiar with English history after all. Thomas Costain has been a key writer over these decades.
Costain is a wonderful historical novelist, a Canadian who switched from journalism to fiction at the age of 57. His style is not quite so turgid as some of the other writers of that time and most of his characters are fully developed with the many virtues and faults all of us have. Below the Salt was the #9 bestseller in 1957 and takes place in 12th and 13th century England. After reading so much about Henry VIII and the Plantagenets in The Autobiography of Henry VIII and Wolf Hall, I was happy to find that this novel takes up the beginnings of that family as rulers in England, shortly after the famous Norman conquest in 1066.
The main event is the writing and signing into law of the Magna Carta, which was the seed in England for an eventual democratic age and laid the foundations for the rights of the common man, rights which had no existence in the dark ages of feudal society and rule by monarchs. It is an exciting story.
The only extremely odd aspect of Below the Salt is that the history is couched in a current story where an aging American politician has past life memories of his involvement in those earlier times. Not that I have a problem with past lives or recovered memories of them, but in this case it is awkwardly done. The approach does fit in with the influence of psychology and studies about the mind which feature in much of the fiction of the 1950s. Costain went on to write two more historical novels though none of them made top ten bestseller status, so I now bid him adieu.
(Below the Salt is another out of print 1957 bestseller. Look for it in libraries and at used book sellers.)
Posted by Judy Krueger at 11:06 AM