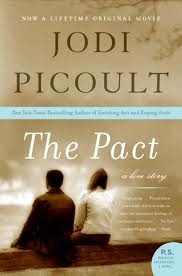 Jodi Picoult is a writer who tackles the thorny moral issues we face in modern life. She is one of many, particularly female, authors who approach novel writing with a similar focus: Sara Paretsky, Anita Shreve, the late Olivia Goldsmith, Meg Wolitzer, to name a few. These novelists serve the purpose in fiction loosely called "to entertain and inform." In my opinion they vary widely in writing skill and I would place Jodi Picoult somewhere in the middle range between horrible and great.

The Pact is her fifth novel out of eighteen. The story is anchored by two teenagers, Chris and Emily, who were raised together by neighboring families, making their relationship something like a very close brother and sister bond. As teens they begin having sex and falling in love.

Due to a childhood incident of sexual abuse, never revealed to anyone, Emily has problems with the sex though she loves Chris with all her heart. During their senior year in high school, she becomes depressed and pregnant. She decides to kill herself, convincing Chris to help her. After her death, Chris is arrested for murder, held in prison with no bail for over a year, and emerges from the entire experience changed and probably permanently damaged. The two families, who were best friends, turn into enemies.

The entire novel is fraught with issues: how well parents really know their children is a major one, but mainly the troubles and quandaries of teens rule the tale. Though Picoult reveals the death of Emily and the fact that the two lovers had a suicide pact in the first chapters, the reasons for their problems are explained gradually throughout the book, giving it the feel of a mystery.

With all the elements for a blockbuster pageturner and a deep story in place, this was Jodi Picoult's breakout novel. It has an average of 4 stars on both Amazon and Goodreads, though the hardcover is out of print and the paperback was hard to find in my local libraries and bookstores. My fellow reading group members almost all gave it a resounding thumbs up. Then there is me.

I felt squirmy and creeped out the whole time I was reading The Pact. I didn't like the way it was plotted and I was painfully aware of the author's research. Of course, I didn't like Twilight either. Apparently The Pact has been read and loved by many teens, so the author must have touched on what it is like to be a teen. I do approve of that.

The issue that hit me hardest was the disconnect between the loving, devoted parents and their kids. I couldn't believe that such "good" parents could be that clueless about what was going on. If that is a common problem in American families, and I suspect it is, then parents of teens would do well to read this book. I will most likely not read Jodi Picoult again.


(The Pact is available in paperback and ebook by order from Once Upon A Time Bookstore.)