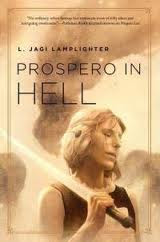 While I enjoyed Prospero Lost, the first volume of Lamplighter's Prospero's Daughter trilogy, this second volume took a leap forward in many ways. Miranda, who is the eldest of Prospero's offspring, was contacted by her father at the beginning of the first book, informing her that one of his spells had gone awry, that he was accidentally trapped in Hell, and that Miranda was to gather the family and warn them of impending doom.

By the end of Prospero Lost she had only found four of her eight siblings, hardly any of whom were on good terms with each other. Many more questions and mysteries had been raised than were answered or solved. As a reader I was mostly impressed but also somewhat overwhelmed by a sprawling plot covering over 400 years and a gargantuan cast of characters both human and supernatural.

Oh reader of little faith! In Prospero in Hell, Miranda locates her remaining siblings, they overcome their differences barely enough to band together, and set off for Hell. Several points of confusion are made clear and Miranda grows into an admirable character even as she remains conflicted, cold and oddly capricious.

The expression "all hell broke loose" takes on new meaning as Prospero's children begin their trek towards the prison of torture that holds their father. Lamplighter's writing blossoms into a Tolkeinian effect both in terms of description and the powers of evil which these characters must overcome.

With this second volume, which belies the tendency of the middle book of a trilogy to be the weakest, Lamplighter demonstrates that she is addressing well thought out themes. What appeared to be a weakness of plotting skills in the first book turns out to be just the beginnings of many complex plot threads that coalesce into an astounding world view. Miranda is not the only contradictory character in the story. Each sibling has deep faults, even if those faults are caused by demons, and the quest to rescue Prospero is the means by which they will overcome weaknesses and grow into their true selves.

Prospero in Hell contains equal parts of despair and hope. By the end I was convinced I was in the hands of a competent fantasy writer and sure that I would follow along to the trilogy's conclusion, experiencing changes in myself as I read.


(Prospero in Hell is available in hardcover by order from Once Upon A Time Bookstore.)