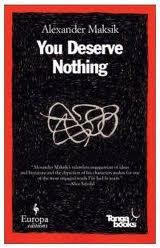 I had many high expectations for this novel. It is set in Paris, a city I love. It was given to me by a reading friend who has similar tastes. It was edited by Alice Sebold. Most of all, I had read that the author was inspired by Albert Camus's The Stranger, a book and an author I rather revere. However, as the title proclaims, I deserve nothing.

Reading the book was pure pleasure, almost guilty pleasure. What could be more enjoyable than a love story between an older man and a very young woman, set in Paris? I was in bliss reading Diane Johnson's Le Divorce. I devoured both Bonjour Tristesse and A Certain Smile by Francoise Sagan. Don't even get me started on Simone de Beauvoir's The Mandarins.

If I were considerably younger and wanted to have a guilt free affair with an older man, I would definitely do it in Paris. So Alexander Maksik combines quasi-existentialism, youth, romance, and idealism in modern day Paris. His writing is very fine, well-crafted, and fairly traditional in style. He got me invested in every character. I never wanted to put his book down and could read happily for hours at a time. I did not want the story to end.

I was left feeling a little bit let down. I was quite aware of the author's admiration for Camus, but I don't think he totally gets Camus. I'm not trying to brag here about how well I get Camus, but when I first read him in my twenties, I didn't understand his novels. (They were pressed on me by my father.) As it turned out, I needed to suffer first. When I read The Stranger again a few years ago, I found the main character, Meursault, a much more compelling character than Will Silver in You Deserve Nothing. The moral ambiguity from which each of these characters suffers is of a different magnitude.

I suppose I am being a bit petty. Alexander Maksik is clearly an ambitious writer and probably destined for a brilliant career. And I did enjoy the book. And he is male. I had more admiration for young Marie than I did for Will Silver with his clay feet. Now there is a down-to-earth French woman for you. Moral ambiguity? Not something French women indulge in.


(You Deserve Nothing is available in paperback by order from Once Upon A Time Bookstore.)