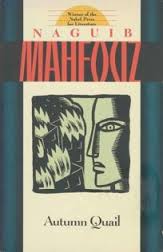 Autumn Quail, Naguib Mahfouz, Doubleday, 1985, (first published in Arabic by an Egyptian publisher, 1962), 167 pp
Note: This will be the first of four posts in which I describe the descent into and the slog through a reading slump I experienced last month.
My Review:
Though Autumn Quail was not translated into and published in English until 1985, it was first published in Egypt in 1962. Hence, I read it as part of the 1962 reading list for My Big Fat Reading Project.
The novel was not as impressive as other Mahfouz works I have read. It does however tie in with another 1962 novel, Seven Days in May, because the major event is a military overthrow of King Faruq in Egypt in 1952. That event is historically known as the 23 July Revolution and was led by a group of army officers, one of whom was Gamal Abdel Nasser. By 1956, Nasser was President of Egypt but that is another story.

Isa ad-Dubbagh is the main character in the novel. He lost his cushy bureaucratic position in the purge that followed the conflict. Though he was corrupt he reasoned that so were many others. Another sorry repercussion was that his upcoming marriage to the daughter of a wealthy government Minister became out of the question.

After some years of heartbreak and emotional turmoil, during which he drinks a lot, neglects his widowed mother, and has a child with a prostitute, he comes to terms with the Revolution to the point of at least an intellectual acceptance of his country's desire for independence.

The writing has even more Western influence than earlier novels by Mahfouz and served as another piece of the historical picture I am getting about 20th century Egypt by reading this author. Thus it was good to have read it and knocked another book off my very long 1962 list. Little did I know it was the beginning of the slump.

Tune in next time for what happened next!

(Autumn Quail is available in a paperback collection of three Mahfouz novellas, by order from Once Upon A Time Bookstore.)
Posted by Judy Krueger at 12:20 PM