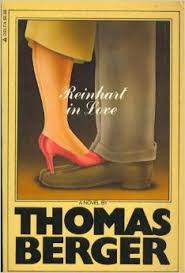 Reinhart in Love, Dell Publishing Inc, 1962, 438 pp
Where did I learn about this author? From an obituary when he died at 89 in 2014. He is one of those under-sung, under-read, literary authors. It was a cinch I would go for that label!
I read his first novel, Crazy in Berlin, 1958, and found it challenging. It was the first literary novel I had read set at the beginning of the Cold War, in which Carlos Reinhart, an American serviceman, is completing his enlistment in Berlin as a medic. I decided it had been worth reading, so I continued with this account of his first year back in the United States as a civilian.
He has troubles fitting in. He lives at home in Ohio with parents who are some truly strange but very American characters. He falls in love with the secretary at the office of a real estate mogul where he took at job and eventually they marry.
True to the character I got to know in the first book, he stumbles into the oddest adventures, all the while trying to figure out how to be an employed man, a husband, and a fellow who has the idea that he is an honest person.

The story includes hot subjects like racism, corruption in local politics and business, and lots of sex. Berger writes rather long, convoluted but grammatically correct sentences filled with literary allusions. Reading him requires work and concentration. Once again I was rewarded by his subtle satire, his humor, and his fine-tuned awareness of life in America.

Since that perception of middle class life is part of what I am looking for when I read these books from the 1960s, it worked fine for me. However, unless that is something you are looking for in your reading, I can't give this novel a high recommendation to all readers.

(Reinhart in Love is out of print. Check for it at your favorite used bookseller site.)
Posted by Judy Krueger at 11:22 AM