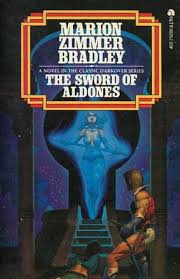 The Sword of Aldones, Marion Zimmer Bradley, Ace Books, 1962, 164 pp
Because I read and loved The Mists of Avalon back in the 80s, I decided to include Marion Zimmer Bradley in My Big Fat Reading Project and read all of her novels in order of publication. The Sword of Aldones is the first book she wrote in her renowned Darkover Series.
There are two schools of thought regarding how to read that series because, like Star Wars movies, they were not written in chronological order. MZB provided a numbered chronological list before her death and some people read them that way. She also recommended reading the books in order of publication, so that is what I am doing.

The Sword of Aldones was written when she was 16, so while she had clearly done her world building in her mind, not all of it comes across smoothly. It is mostly an action tale, there are many characters, and the magic, of which there is plenty, doesn't all make sense.

I liked it anyway, as a tale of two intergalactic civilizations in conflict. Terran is on a path to take over as many planets as possible for trade purposes. Darkover runs on magic and myth. It is a theme of hers and of many other writers, both speculative and historical. I found that theme in Mary Renault's two historical novels about the legend of Theseus (The King Must Die and The Bull From the Sea.) It is also the major theme of The Mists of Avalon.

The writing and plotting and characters are all a bit sketchy and suffer from her inexperience but her voice is there and the promise of what became a fascinating series.

(The Sword of Aldones is out of print but can be found at used book sites and in audio and ebook versions. Happy hunting!)
Posted by Judy Krueger at 12:19 PM