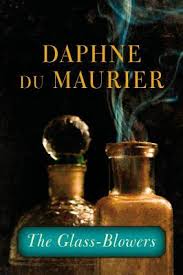 The Glass-Blowers, Daphne Du Maurier, Doubleday & Company, 1963, 348 pp
Daphne Du Maurier has two distinct voices as a novelist. One is the gothic, psychological voice of Rebecca, My Cousin Rachel, and others. The second is the one she uses for her historical fiction, as in The King's General or Mary Anne. The Glass-Blowers, #8 on the 1963 bestseller list, is in the historical fiction mode. The author was descended from a family of glass-blowers and honors them with her novel.

Some readers are more pleased with the gothic novels but I like both of her genres, especially because in the historical ones I always learn pieces of history I didn't know. This one takes place in several renowned glass-blowing establishments, operated by the Duval family and situated south of Paris. It covers the period of time leading up to the French Revolution through to Napoleon becoming emperor. The political upheaval of those times causes great disturbances for the family including loss of business and division between family members who sided with the Republic and those who were Loyalists to the King.

Though it was sometimes tricky to keep all the family members, locations, and political factions straight, I was never less than captivated by the story. It is full of intrigue, heartbreak, and hardship. As in any family saga, there are heroes and heroines alongside less admirable characters. I loved the ways the family dealt with all the problems and divided views. Several awesome female characters are central to the tale.

Best of all, the novel gave me another side of the Revolution than the one taught in school. It showed the daily and yearly challenges that such political turmoil brought to the livelihoods and history of families, especially families who were intrinsic to the character of the society and nation that was France in the late 18th century.

I finished the book with the realization that my knowledge of the French Revolution and its outcomes is rather thin. I have decided to read A Tale of Two Cities (how have I gone through the majority of my life without reading that?) and Abundance by Sena Jeter Naslund, which has lingered on my shelves for years.