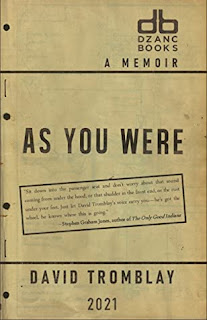 This memoir was the February 2021 selection of the Nervous Breakdown Book Club. It is a searing and tough read.

David Tromblay grew up outside Duluth, MN, son of a Native American father and a woman too young to be a mother. David's mother ran away from his father's abuse, ultimately dropping her two kids off at their paternal grandmother's because she could not afford to raise them by herself.

But grandma was just another link in the chain. Ripped from her tribal home and sent to one of those boarding schools where they practiced a brutal form of conversion therapy designed to turn Native American children into White people, she has no other parenting skills than strict, abusive discipline.

As soon as David is old enough, he enlists in the military and serves successive re-enlistments. It is no more and no less dangerous than his childhood, even in Afghanistan or Iraq. It is all he knows about survival.

When he finally leaves the military, broken in body and mind, he finds his spirit and a way to live through writing. What a writer he is! The memoir is written in second person, a way to distance himself from himself. It works brilliantly.

If you are triggered by violence, especially towards children, I would not fault you at all for skipping As You Were.

I have a few thoughts I would like to mention. For many years I have been reading both history and historical fiction by authors from all over the world and set in places all around the globe. The through line to it all is violence, struggles for power, feuds, genocides, etc.

Another through line is love, faith in a higher power, the benefits of literacy, education and the arts. All of this is part of being human.

What I learned from David Tromblay, and not for the first time, is that while our bodies can be weak and vulnerable, our spirits are tough. I never tire of reading just about any kind of story. Trauma can be found anywhere from the home to the streets to the battlefield, even within the natural world. It takes a certain equation of toughness and compassion to get us through.