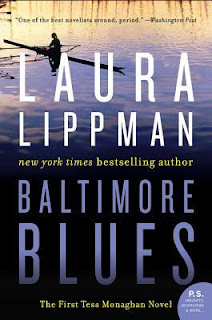 Perhaps ill-advised, but I decided to add another mystery/crime writer to my lists. A little over two years ago I read Sunburn by Laura Lippman and was so impressed by her talent in making a misbehaving female character so likable. I have a thing for misbehaving women who manage to escape controlling men!

Baltimore Blues is her first novel and the first of her 12 book series featuring detective Tess Monaghan. Tess had been a top reporter for the Baltimore Star newspaper but like so many papers in the early 1990s, the Star folded leaving Tess unemployed. She is making do with part time jobs, living cheap with a relative who owns a bookstore.

When her rowing buddy gets arrested for the murder of his fiancée's boss, Tess goes into action. She knows the city, she does not believe her friend is guilty, and she usually feels she can do a better job at finding out stuff than anyone else. Annoying, I know. I also have a thing about annoying women who are good at what they do.

I thought the plot was a bit over complicated but so are the plots of Sara Paretsky, whose books I love. Since this is Tess's first go at being a detective, she has to learn as she goes giving lots of opportunities for red herrings and blind alleys. She is at ease with complicated matters due to her half-Irish, half-Jewish family.

It all fit together in the end. Some bad actors turn out to be good, some rich people turn out to be very bad. Best of all, Tess and I found out who the murderer was on exactly the same page!